Bitcoin – Where to from here?

A glimpse of the Bitcoin’s recent history and immediate future

After the summer holiday, it is worth taking a look at how the cryptocurrency market, and particularly Bitcoin, its largest component, has been “growing up” while out of school.

But first, let’s go back to basics.

Bitcoin is a virtual currency or “cryptocurrency” created in 2009.

Unlike traditional or “fiat” currencies, cryptocurrencies are not issued by a state banking authority, but are entries on a Blockchain ledger, which allows its value to be stored and transmitted securely, transparently. Valued, like state backed currencies, by supply and demand, cryptocurrencies are not prey to the political influences that governmental money experiences. Value is set by the market, every hour of every day.

Bitcoin is by far the largest cryptocurrency in value, but it operates on a strict limit. The issue of Bitcoins is fixed at a maximum of 21 million units, as defined in the original “code”. Early 2018, 17 million Bitcoins had already been issued.

Due to the difficulty in calculations in the blockchain process, Bitcoin creation follows a decreasing rate: 12.5 coins every ten minutes today, compared to 50 in 2009. The next date on which the number of Bitcoin rewards generated will be divided by 2 or «halving», is estimated at May 20th, 2020.

The price of Bitcoin at any moment (which is an average aggregate of the prices on trading platforms) began to be recorded in 2011. Since its inception, Bitcoin price has fluctuated significantly, and particularly in 2017. After crossing the $1,000 threshold early 2017, the Bitcoin price reached an all-time high in December at $19,000. It then fell at the end of December 2017 and continued to decline in the first half of 2018 to reach $6,500. It dropped to $3,500 at the end of January 2019.

One factor that could weigh in the future of cryptocurrencies in general, and on Bitcoin in particular, is the issue of global energy consumption.

According to the index published by the University of Cambridge, annual consumption of the Bitcoin network is 60.57 TWh. This is just slightly more than Switzerland’s annual electricity consumption and accounts for roughly 0,25% of global demand. And this energy-unit-per-Bitcoin ratio is increasing as the volume of data processed per block is growing.

In partial mitigation, a study from CoinShares shows that coin miners are mainly located in regions where electric power is cheap, such as Southwestern China, but also Scandinavia, the Caucasus, Pacific North West or Eastern Canada. The reason this power is inexpensive is that it is generated by non-carbon-producing hydroelectric systems, so the mining industry is renewables-driven. Mining, from this point of view, would be one of the “cleanest” industries in terms of energy consumption.

Anyway, Bitcoin is similar to the phoenix: a website counts the times the Bitcoin was declared as dead. Since 2010, it has already “died” 371 times.

… or time to reload?

Jim Reid, head of global fundamental credit strategy at Deutsche Bank, observed that central banks’ ultralow interest rate policies should impact “alternative” currencies such as Bitcoin, along with the value of other “commodities” positively and make them “more attractive”, while hurting more conventional investment vehicles. Henny Sender of the FT, wrote in a column for the Nikkei Asian Review that the Chinese have increased their purchase of Bitcoin by 50% over the last few months, while at the same time the Yuan sank in value, falling below 7 yuan against dollar.

In addition to central banks’ ever lower interest rate campaign, the big news in the crypto sector is the August announcement that Bakkt futures market will come start trading on September 23rd. Bakkt is a long-awaited project, backed by ICE, that aims at offering institutional investors the possibility to buy bitcoins in a transparent, secure and supervised framework. The platform will offer two types of physically backed futures contracts: daily and monthly settlements. Existing futures contracts traded on the CME only settle in cash yet.

The trading platform project is further supported by the involvement of companies such as BCG, Microsoft and Starbucks. The intention is that this electronic marketplace should provide a venue for large institutional investors to participate in the cryptocurrency world, which they have been slow to join to date.

Though this institutional support may not seem to fit the original “outsider” ideology behind Bitcoin, it could help fix market weaknesses and offer a higher trading volumes, more transparent trading and price validity. Tools against price manipulation, as well as access insurance solutions will be provided. Furthermore, as the backing of futures contracts implies the physical purchase of Bitcoin, it could push prices higher. Bakkt could be one of the major improvements in the crypto markets making it more mature.

De facto, the still developing cryptocurrency market is now entering a phase of consolidation and professionalism. Brian Armstrong, co-founder and CEO of Coinbase announced he sees inflows from institutionals of $200-400M per week in new crypto deposits. Coinbase, the US trading platform recently widened its lead through the acquisition of Xapo for $55 million; it now offers the largest crypto storage service. Xapo, one of the most regulated and renowned Bitcoin storage platforms in the world, owns a top security storage bunker in the Swiss Alps.

Switzerland is indeed an early adopter in the crypto world. Recently Seba and Sygnum got a FINMA banking licence. “This is the first time such licenses have been granted worldwide, so Switzerland is playing a pioneering role,” said Manuel Krieger, CEO of Sygnum Switzerland. “We now have a responsibility as an enabling platform to help banks and other financial players make the step into the digital asset world.”

Doesn’t it look like a lot of things were put in place during the summer vacation for the pupil crypto to be ready for the start of the school year?

Blue Lakes Advisors teamed up with Crypto Fund AG to distribute the strategies elaborated in Zurich. The passive approach replicates an index of the 10 largest crypto currencies and the systematic approach aims at delivering performance in following established bullish and bearish trends. Should you wish to know more about crypto asset management, please feel free to contact the author. 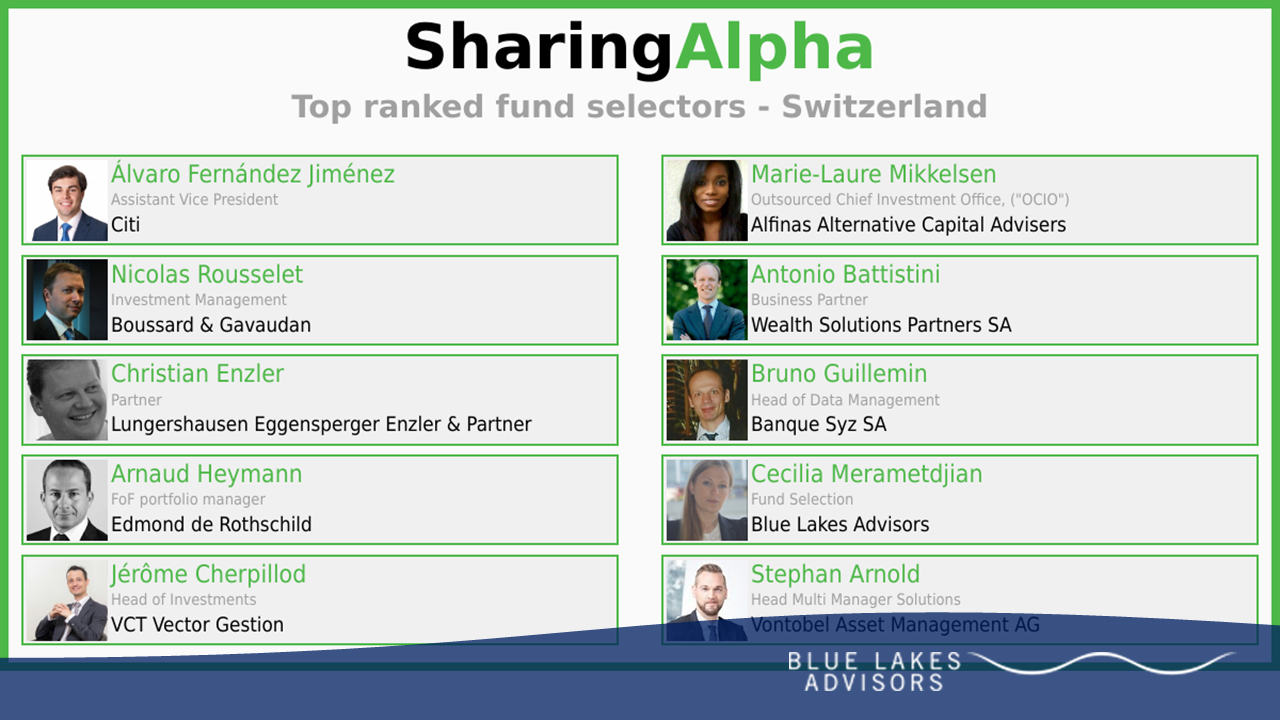 Blue Lakes Advisors S.A. is pleased to share the fact that the quality of its fund selection teams is recognised. 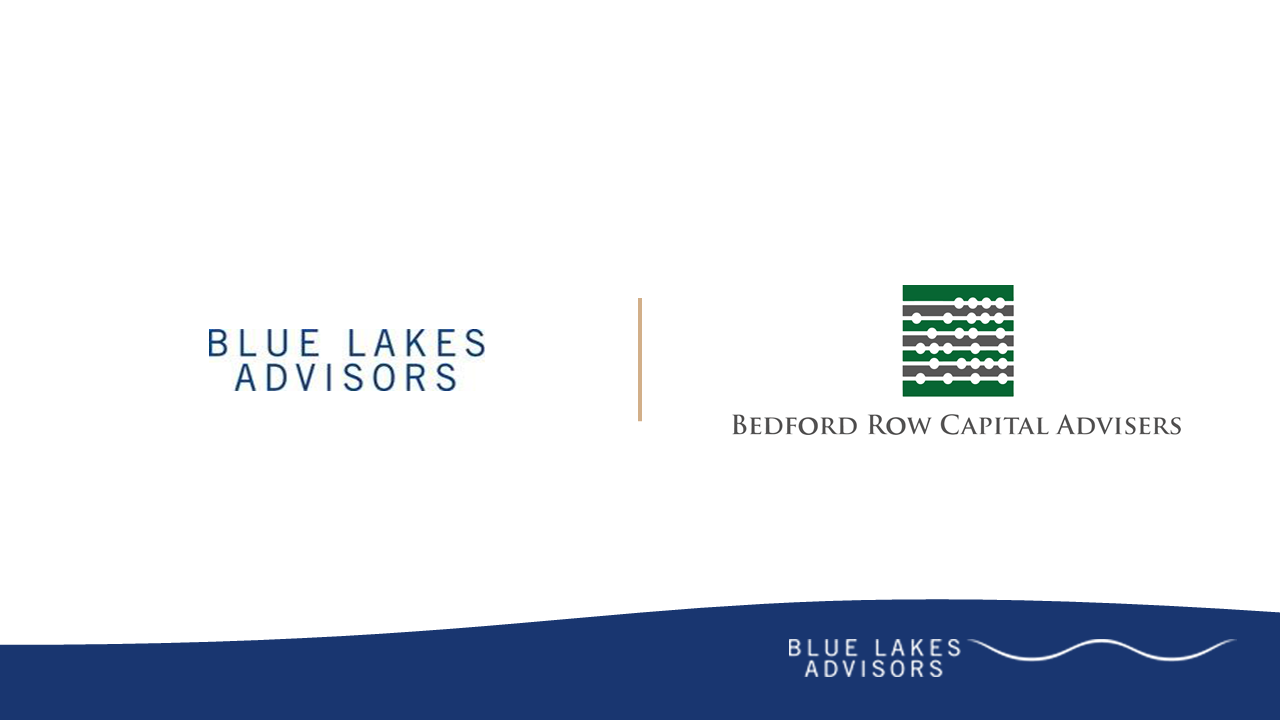 Blue Lakes Advisors is pleased to announce that it has concluded a “Business Introducer Agreement” with Bedford Row Capital, of the UK.